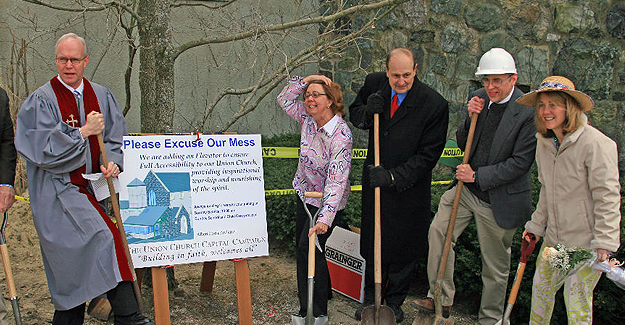 THE UNION CHURCH ACCESS PROJECT
Like many older buildings, the Union Church in Waban was built without provisions for access by persons for whom stairs present permanent or temporary obstacles to entry or for passing from floor to floor. The congregation has recognized this problem for some time, but finding a solution was not easy. The church is located on the side of a hill, with many different floor levels, and no outside entries at ground level. Architectural studies of the church all found that some combination of ramps and elevators would be required, and that some existing interior space would inevitably be lost.

Some limited fund-raising was begun in the 1980s, when Union Church accessibility was just a remote dream. More serious fund-raising resumed in 2000, and a capital campaign conducted in 2006 secured sufficient additional pledges from church members and friends to ensure that the project could be carried out. The first phase of the access project, completed in the fall of 2006, included installation of a ramp compensating for a two-foot difference in elevation between the vestry, the reception room and several classrooms. This phase also included construction of new men’s and women’s restrooms on the same level as the sanctuary and church offices.

The second phase consisted of installation of an exterior elevator that stops on three floor levels plus the outside ground level. From a new vestibule adjoining the Parish House entrance, the elevator descends one-half floor to the reception room level, ascends one-half floor to the sanctuary and office level, and one-and-a half floors to the level of the choir practice room.

A ceremonial ground-breaking for this phase took place immediately following the service on Easter Sunday 2007. Commencement of construction had to await some utility relocation and receipt of final technical specifications from the elevator manufacturer, but began in earnest in mid-July 2007. Over that summer, “sidewalk superintendents” could witness the almost daily upward advance of the elevator shaft, as well as the door cuts being made on each level through the massive stone end-wall of the church. No stained-glass windows were lost, but the windows on the west side of the minister’s office had to be filled in, and the music director’s office had to be relocated. An elevator machine room was built in a little-used basement area.

Following construction of the elevator shaft, assembly of the elevator itself began at the end of 2007. Various technical problems delayed completion several months beyond the expected opening date. At last, on November 6, 2008, the Union Church elevator passed final testing by the Department of Public Safety, making it immediately available for use. The formal dedication ceremony was December 14, 2008.

We have many to thank for making this dream a reality. We owe a great debt of gratitude to:

Thomas J. Humphrey who revitalized the Access Fund in 2000 with a challenge gift in memory of his aunt, long-time member Elizabeth Burnham.

Stuart Laughlin and Karen Weisgerber and their energetic committee who led and shepherded our Capital Campaign.

Albert Costa who designed all of the structural additions and modifications related to the project and oversaw construction from start to finish.

Gary Reed, building committee chair, who managed this complex project to be “on time and on budget.”

And last, but surely not least, all members and friends of the Union Church who gave of their time and treasure to make this dream a reality.

The elevator is now fully operational and available to the public.