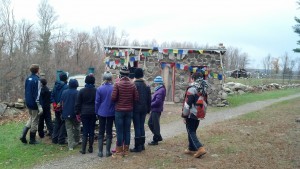 Our group outside the Tibet House where many of us would be spending the night.

Our church’s youth understand in new and deep ways the difference an animal from Heifer International can make in the lives of impoverished families around the globe. In addition, our youth have gained a different perspective on their lifestyles compared to people in many other countries and an interest in figuring out how to live differently so that others may live more abundantly. That’s because last weekend, 11 teens and 3 adults spent 24 hours at Heifer International’s education center and demonstration farm, an hour’s drive away in Rutland, MA. We were participating in Heifer’s Global Gateway program. Described as a cross between “Survivor” and National Geographic, the program challenges participants to live for twenty-four hours in the same conditions represented by the communities with whom Heifer works around the world. 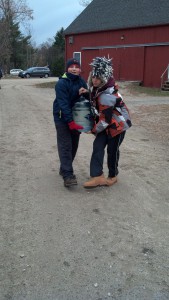 Nick and Aden figure out how to carry the water we will need to cook our lunch.

We arrived at the Heifer Farm late Sunday morning and began with a tour of the Global Village a collection of ten or so homesteads representing the living conditions of communities around the world with whom Heifer works. Kenya, Guatemala, Peru, Tibet, and Poland were some of the homesteads we visited. Each homestead included a simple dwelling, a cooking area, and some farm animals, such as meat bunnies or guinea pigs, goats, sheep, bees, alpacas and even yaks. 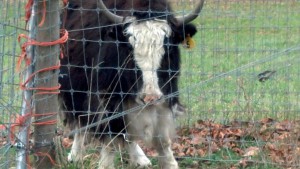 The not so friendly yak who crashed against the door to the Tibet House while we tried to sleep.

After our tour it was time to cook lunch outside the Kenya house around the campfire. Our lunch served as a training session in making a fire and cooking a simple meal, skills we would need to survive our night in the Global Village. For lunch, we learned to make Ugali which is vegetables sautéed in bouillon over polenta. All of the vegetables we included –some leaves of kale, a green pepper, an onion and some garlic – were grown at the Heifer Farm. While the amount of food looks small, it was split among the 15 of us. Almost all the kids raved about how good the kale tasted cooked over the open fire! 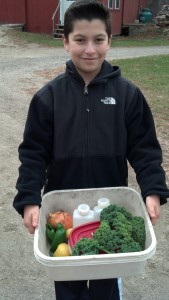 Oliver carries all the food that we will use to make Ugali, a Kenyan dish, for lunch for the 15 of us. 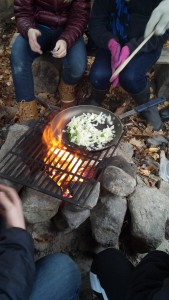 Lunch is being cooked over the open fire.

As evening arrived, the much anticipated lottery, during which group members were assigned for the night to different countries, took place. Part of our group was assigned to live in Tibet for the time, while the rest of our group lived in Poland. During the next 18 hours, our Tibetan and Polish families struggled to make meals, sleep in rustic shelters without electricity, and participate in farm chores while confronted with limited resources, insufficient heat, lack of electricity, meager food portions, disabilities, pregnancy and child care responsibilities. How did we fare? Everyone survived and everyone was deeply affected by the experience. At a debriefing led by our facilitator, these two quotes were representative of the kids’ comments about what they would take away from their experience. 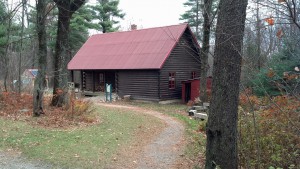 This is the Poland House where many in our group spent the night.

“In America we have so much private consumption in that we really have so much more, whereas Africa has 15 % of world population but only 2% personal consumption, so that’s pretty shocking…I’ll pass on the knowledge that we are really very fortunate here and people will really never know what it’s like to have the comfort that we have…I feel pretty odd by the living style. All over the world there are different kinds of houses which is pretty impressive I will take away that I should not take for granted what I have.”

“[Other people in the world], they have so much less.and they don’t take it for granted. Like they appreciate their food and they wouldn’t waste their food. I’ll pass on to people that they should be thankful for what they have. I feel sad for people who aren’t going to go home and just have food. People have to spend a long time to get their fire ready and collect all the firewood. They can’t just turn on their stove or turn on their heat because they have to work. What I’ll take away is that America should be more thankful for what we have because there are many other countries that are really thankful for the little things that they have.”

On December 8 in worship, the youth will talk more about their experience and show a brief video of their time at the Global Gateway.