Pastor Stacy Swain gave the invocation for the rally on June 11.

The campaign unveiled a Declaration of Fundamental Rights and Poor People’s Campaign Moral Agenda* that will guide the movement through its upcoming 40 days of nonviolent direct action and beyond. The 40 days included a rally and direct action. 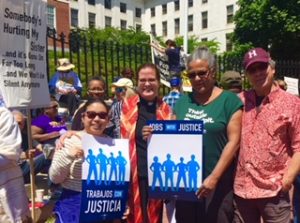 This campaign is an invitation to us to come along side and learn from those who are suffering from poverty and the issues that perpetuate poverty by attending the rallies with a listening, “companioning” heart.

The campaign culminates with a rally and action in Washington D.C. on Saturday, June 23rd.  Buses will be going from Boston.  To learn more about transportation please go here.
“Fifty years after Rev. Dr. King and the 1968 Poor People’s Campaign declared that silence was betrayal, we are coming together to break the silence and tell the truth about the interlocking evils of systemic racism, poverty, ecological devastation, the war economy and our distorted moral narrative,” the Moral Agenda reads. “We declare that if silence was betrayal in 1968, revival is necessary today.”